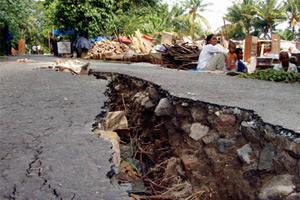 Tremors from fracking: Scientists have linked Oklahoma’s largest earthquake—a 5.6 magnitude quake near the town of Prague, in 2011—to hydraulic fracturing, supporting claims that the process increases seismic activity. Fracking, as it is known, injects water and chemicals into petroleum deposits in order to extract trapped gas. This week, researchers at the University of Oklahoma, Columbia University, and the U.S. Geological Survey published findings that linked wastewater injection to seismic events in the area, highlighting the need for greater government oversight. The central U.S. has experienced an 11-fold increase in seismic activity in recent years. “There’s not a magic bullet,” said researcher Heather Savage, “but if we have more monitoring capabilities we can watch these things.”

Oklahoma’s geological office said the quake, which destroyed 14 homes, could have been “the result of natural causes.”