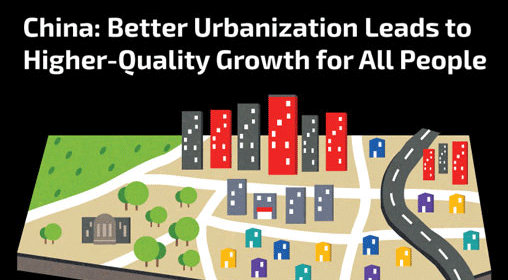 BEIJING – The greatest risk China faces in its historic modernization is the massive imbalance between urban and rural areas, according to the country’s top agriculture official.

“The most important and difficult task is to resolve issues concerning agriculture, countryside and farmers … to realize the agricultural modernization and the urbanization of most farmers,” said Minister of Agriculture Han Changfu in an exclusive interview with Xinhua on Sunday.

Only a week ago, at the highest-level meeting it has ever convened on urbanization, the Chinese leadership pledged proactive yet steady moves in pushing forward human-centered urbanization as it looks to balance urban-rural development and unleash domestic demand.

The statement came against the backdrop of China’s rapid urbanization. By the end of 2012, the country had 710 million urban residents. For the first time in China’s history, its urban population exceeded the rural population, with city-dwellers accounting for 51.27 percent of the total population.

Resident numbers are not everything, as poverty elimination is more important than household registration.

Laiyuan, a poverty-stricken county about 160 kilometers to the southwest of Beijing, is home to a number of people living below the $1.25 a day global poverty line. Last year, the per capita annual income of farmers in the county barely reached 3,000 yuan ($490), far below the national average of 7,917 yuan.

A walk along the dusty country road in Laiyuan is a reminder of the striking contrast between villages in different regions. Farmers in developed rural areas have built themselves multistory brick houses, while rural residents in the county live in clusters of small, run-down adobe.

Despite its reputation as an old revolutionary base and home of the country’s first primary school under the Hope Project, which aims to improve rural primary education, Laiyuan remains a “virgin land” for construction, let alone urbanization, due to lack of financial resources.

In interviews with Xinhua reporters, some local teenagers said that a few years ago they had only one meal a day.

Fortunately, things are changing as both central and local authorities are working to solve the problem.

The country will emphasize urbanization in the less-developed central, west and northeast regions, with the aim of making growth more balanced, according to a statement released after a central urbanization work conference, which ended on December 13.

According to the statement, efforts will be made to build up a diverse and sustainable funding mechanism for the drive. It stressed the importance of green and low-carbon development in future urbanization.

In a bid to promote green development, Laiyuan county government proposed a scheme to rejuvenate the local economy through tourism. Several scenic spots, including Mount Baishishan, which is part of Fangshan Global Geopark, have been opened to visitors.

In Zhuanghuo Village, villager Liu Yanjun is preparing guest rooms for accommodation. “Guests staying here can also eat here. The flavor might not be as good as the star-grade restaurants elsewhere, but my cooking with organic vegetables will offer a different farm-style taste,” said Liu.

Tourism resources are rich and will not dry up like other resources, such as minerals, said village head Zhou Fengming.

In the past, intensive mining, a pillar industry of the local economy, has destroyed the local environment and led to tax exports, according to Liu Chunyang, director of the county’s tourism bureau.

Thanks to newly opened travel routes that shorten the one-way trip to 2 hours from Beijing, Tianjin and Shijiazhuang, the county received a total of 826,000 visitors this year.

Laiyuan’s ongoing economic transition showcases the accelerated development of China’s late-developing areas and offers an example for the country to enrich its 100 million plus poverty-stricken population.

“Urbanization will not make the countryside perish, but boost the harmonious development of new cities and villages,” said Han Changfu, the agriculture minister.

BEIJING — The number of rural poor in China dropped by nearly 67 million from 2010 to 2012, according to a State Council’s report on Wednesday.

By the end of 2012, there were nearly 100 million rural residents still living in poverty, the report said.

Liu Yongfu, director of the State Council Leading Group Office of Poverty Alleviation and Development, delivered the report to lawmakers at a bimonthly session of the Standing Committee of the National People’s Congress (NPC), being held from December 23 to 28.

Infrastructure in these areas has constantly improved, said the report. A highway linking Tibet’s Medog County, the last roadless county in China, opened to traffic in October 2013.

Rural education has moved forward. At the end of 2012, 97 percent of children at age of 7-15 in key counties had attended school.

A development-oriented poverty reduction outline for rural China (2011-2020), which was promulgated in 2011, set the per capita annual net income of 2300 yuan as the new rural poverty threshold, significantly up on the original standard.

Challenges still exist. Many children in remote areas walk two to three hours a day to school and dropout rates in those areas are high.

Medical expenses in poor counties are 60 percent of the average rural level. Many are unable to see doctors when necessary, Liu said in the report.

To better fight the problems, the official performance assessment system should be adjusted in the key counties, to ensure local officials put more emphasis on poverty relief.

A national poverty relief information database will be established to get a better picture of the overall poverty situation and make the work more specific.

Efforts will also be made to make better use of funds and improve supervision of spending.

“People hear what they see”