A bad year for bees 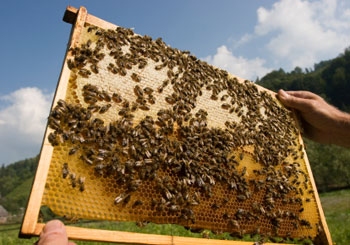 Colony collapse disorder, the mysterious scourge that has been killing off honeybees since 2005, has suddenly become a lot more deadly. This past winter, as many as half of all hives succumbed to the disorder—up from one third annually in recent years, and between 5 and 10 percent when hives were healthy. “It is a catastrophe in progress,” beekeeper Steve Ellis tells Reuters.com.

A quarter of the plant-based foods Americans eat rely on honeybees to pollinate them. Researchers still can’t say exactly what is causing the bee die-off. Drought, mites, or viruses could be partly to blame, but studies increasingly suggest that a class of pesticides called neonicotinoids are the root of the problem. The pesticides, which came into wide use around the time colony collapse began, have been shown to scramble bees’ memory, making it difficult for them to find food.

Last month, a group of beekeepers and environmental organizations sued the Environmental Protection Agency, demanding that it immediately ban two widely used neonicotinoids. But that may not be enough to stem the tide of bee deaths, says University of Maryland entomologist Dennis Van Engelsdorp: “It’s quite astonishing how many chemicals are in the environment, probably affecting bee health.”