Behind Your Holiday Sweet Potato Dish, Hard Work In The Fields

There’s an oil painting on one wall in the cluttered room that serves as central headquarters of Burch Farms, a large vegetable grower in Faison, N.C. The painting shows an African-American couple, the woman in a long, plain dress, the man in a homespun shirt. They’re digging sweet potatoes with their bare hands and an old-fashioned hoe.

Jimmy Burch Sr., who owns the business together with two brothers, says that when he saw this painting, he had to buy it — partly because he grows sweet potatoes himself, and partly because this crop has been such a big part of Southern culture.

The sweet potato “was easy to grow, relatively. We had the right climate for it. And it was cheap!” he says. “All the rural people, farmers, that’s what they ate all winter. That and collard greens. I mean, sweet potatoes and collard greens are a big deal in the South. It don’t get more traditional than that!”

Now traditional is trendy. The humble sweet potato, after decades of decline, is making a comeback. People have woken up to the fact that its orange flesh is full of nutrients. “Anything with vitamin A, they’re buying the hell out of it,” he says. “And they need to! Because it’s good for you!” 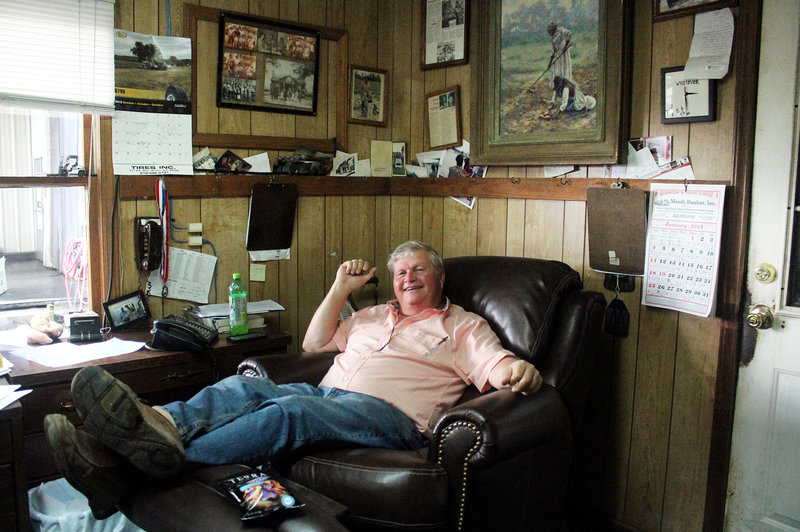 Sweet potato production has doubled over the past 15 years. In North Carolina, it’s tripled. North Carolina now produces just over half of all the sweet potatoes in the country.

This year, Burch Farms has a monster crop, the biggest ever. Jimmy Burch’s problem, on this day, seems to be running out of wooden pallets and bins to store them all. He keeps making phone calls, trying to find more.

“I mean, it’s a good thing, don’t get me wrong. The Lord gave me a good crop, and I’m gonna dig ’em. I’m going to get them in the house, somehow or other.”

But digging this crop takes many hands. As Jimmy Burch puts it, “a world of people.”

People like Nabor Segundo and his wife, Rosalia Morales.

I meet them early in the evening at their home in a small trailer park that sits along a country road amid the fields east of the town of Mount Olive.

They and their infant son, Alan, share this two-bedroom trailer with one other family. All together, four adults and four children live here. 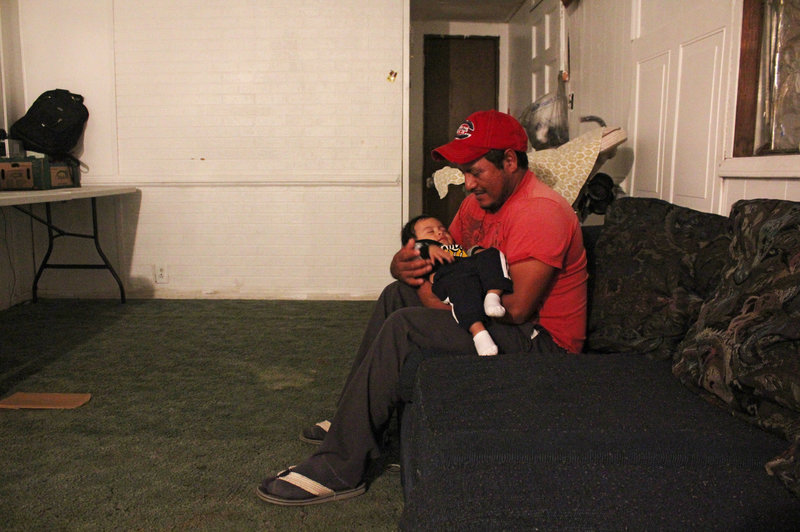 Nabor Segundo, with his infant, son, Alan. He and his family share this two-bedroom trailer with one other family. | Dan Charles/NPR

Segundo and Morales met each other a few years ago, in Florida, picking peppers. “We saw each other and fell in love,” Segundo says, and both of them start giggling.

The couple spends about half of each year in Florida. But for about six months in summer and fall, the work is here, in the coastal plain on North Carolina.

That’s actually a relatively long time for migrant work. They can stay here that long because they switch back and forth between sweet potatoes and another labor-intensive crop: tobacco.

The tobacco work is now finished. It’s the end of the season. All that’s left to do is bring in the sweet potatoes.

In every sweet potato field, the work is similar. A tractor does the first part. It pulls a set of steel disks through the vine-covered field, turns the soil upside down, and exposes a bounty of sweet potatoes. 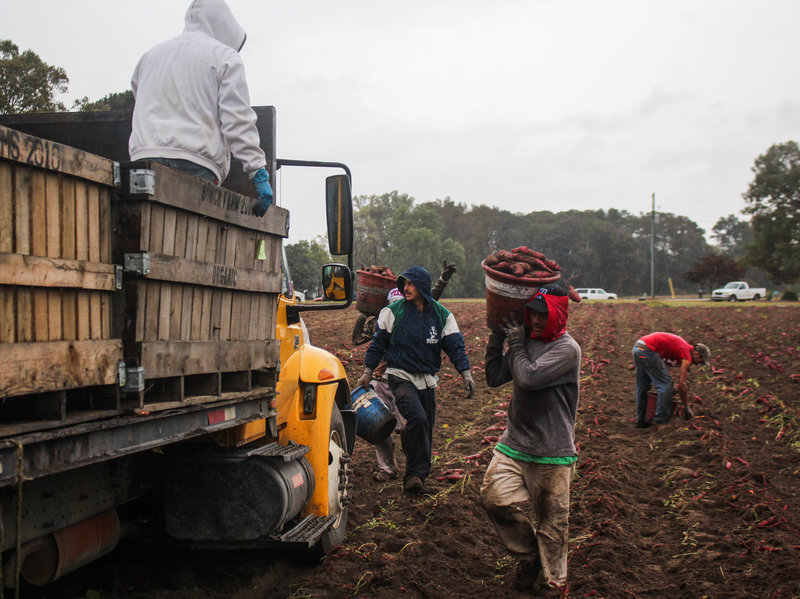 The rest is done by hand. The skin on a fresh sweet potato is too fragile for machinery. Men — and a few women — move through the field, backs bent, picking up sweet potatoes and dropping them into plastic buckets. When the buckets are full, the workers lift them to their shoulders, carry them to a flatbed truck, and dump them into bins.

It’s exhausting work — some of the most physically demanding farm work there is.

“When you first get here, your waist, your hands and your feet can’t take it,” Segundo says. “It’s really hard the first time, because you don’t know how to carry the bucket, how to lift it to your shoulders. It’s really hard to learn.”

Segundo says each bucket weighs 30 pounds or so. He fills that bucket, and carries it to the truck, 400 to 500 times each day.

It’s a daily load of six or seven tons of sweet potatoes. At 50 cents a bucket, it adds up to a daily wage of $200 or $250. That’s on the days the laborers are working. On the day I was there, it was raining, so they earned nothing at all. 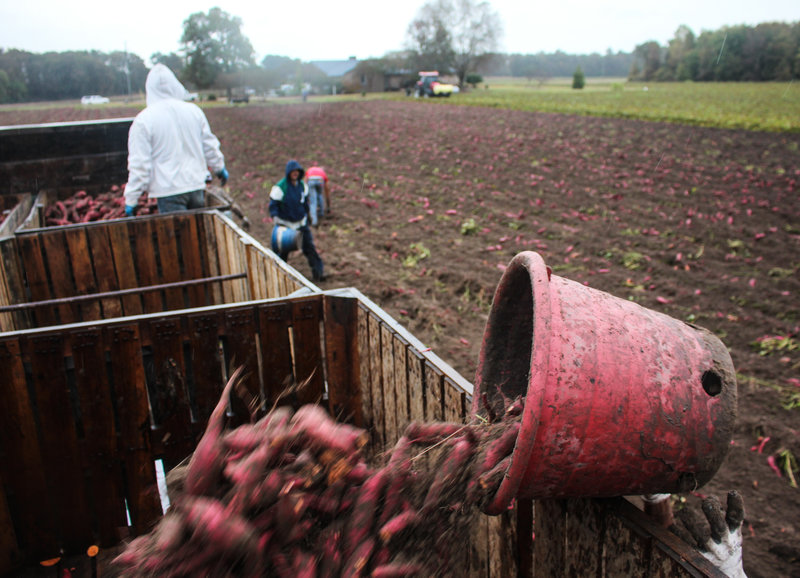 Buckets of sweet potatoes go into bins on a flatbed truck. | Dan Charles/NPR

From this field, the sweet potatoes, still caked with dirt, go into huge, climate-controlled barns for storage.

They will sit there at least for a few weeks, because sweet potatoes improve with a bit of age. The skin becomes less fragile. They also get sweeter: Some of their starch turns into sugar.

Meanwhile, the farm workers who pulled them from the soil move on to other fields, and other kinds of food.

“Imagination is but another name for super intelligence.”