Cannabis and Pregnancy – Effects on Children

Cannabis and Pregnancy – What are the potential health effects?

The combination of cannabis and pregnancy can be harmful to your baby’s health. The chemicals in marijuana (in particular, tetrahydrocannabinol or THC) pass through your system to your baby and may harm your baby’s development.

Although more research is needed to better understand how marijuana may affect you and your baby during pregnancy, it is recommended that pregnant persons do not use marijuana. 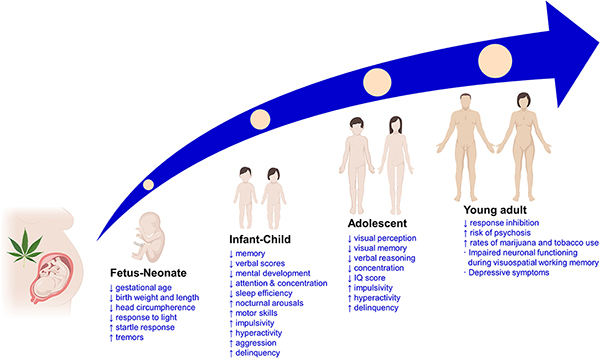 Can using marijuana during my pregnancy affect my baby’s development after birth?

Although scientists are still learning about the effects of marijuana on developing brains, studies suggest that marijuana use by persons during pregnancy could be linked to problems with attention, memory, problem-solving skills, and behavior in their children later in life.

The health effects of a breastfeeding person’s use of marijuana on their infant or baby are not yet fully known. We do know that chemicals from marijuana can be passed to a baby through breast milk. THC is stored in body fat and is slowly released over time, meaning a baby could still be exposed even after a person has stopped using marijuana. Thus, persons who are breastfeeding are encouraged to avoid all marijuana use.