Drones: The New Eye In the Sky 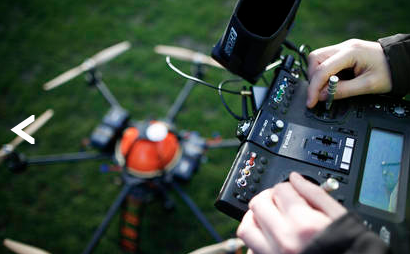 5/5 - (1 vote)
At the edge of an alfalfa field outside Grand Junction, Colorado Deputy Sheriff Derek Johnson squints at a speck crawling across the brilliant, hazy sky. It’s not a vulture or crow but a Falcon, a new brand of drones, and Johnson is flying it. The sheriff’s office here in Mesa County, a plateau of farms and ranches, is weighing the Falcon’s potential for spotting lost hikers and criminals on the lam. A laptop on a table in front of Johnson shows the drone’s flickering images of a nearby highway.

Standing behind Johnson is the Falcon’s designer, Chris Miser, a former Air Force captain who worked on military drones before quitting to found his own company. The Falcon has an 8-foot wingspan but weighs just 9.5 pounds. Powered by an electric motor, it carries two swiveling cameras, visible and infrared, and a GPS-guided autopilot. Sophisticated enough that it can’t be exported without a U.S. government license, the Falcon is roughly comparable, Miser says, to the Raven, a hand-launched military drone— but much cheaper. He plans to sell two drones and support equipment for about the price of a squad car.

The Falcon can fly for an hour, and it’s easy to operate. To navigate, Johnson types the desired altitude and airspeed into the laptop and clicks targets on a digital map; the autopilot does the rest. To launch the Falcon, you simply hurl it into the air. An accelerometer switches on the propeller only after the bird has taken flight, so it won’t slice the hand that launches it.

A dozen years ago only two communities cared much about drones. One was hobbyists who flew radio-controlled planes and choppers for fun. The other was the military, which carried out surveillance missions with unmanned aircraft like the Predator.

Then came 9/11, followed by the U.S. invasions of Afghanistan and Iraq, and drones rapidly became an essential tool of the U.S. armed forces. The Pentagon armed the Predator and a larger unmanned surveillance plane, the Reaper, with missiles, so that their operators—sitting in offices in places like Nevada or New York—could destroy as well as spy on targets thousands of miles away. Aerospace firms churned out smaller drones with increasingly clever computer chips and keen sensors—cameras, but also instruments that measure airborne chemicals, pathogens, radioactive materials.
The U.S. has deployed more than 11,000 military drones, up from fewer than 200 in 2002. They carry out a wide variety of missions while saving money and American lives. Within a generation they could replace most manned military aircraft.

At least 50 other countries have drones, and some, notably China, Israel, and Iran, have their own manufacturers. Aviation firms— as well as university and government researchers— are designing a flock of next-generation aircraft, ranging in size from robotic moths and hummingbirds to Boeing’s Phantom Eye, a hydrogen-fueled behemoth with a 150-foot wingspan that can cruise at 65,000 feet for up to four days.

‘Simply hurl it into the air’: Deputy Sheriff Derek Johnson launches the Falcon.

MORE THAN A thousand companies, from tiny start-ups like Miser’s to major defense contractors, are now in the drone business, and some are trying to steer drones into the civilian world. Predators already help Customs and Border Protection agents spot smugglers and illegal immigrants sneaking into the U.S. NASA-operated Global Hawks record atmospheric data and peer into hurricanes. Drones have helped scientists gather data on volcanoes in Costa Rica, archaeological sites in Russia and Peru, and flooding in North Dakota.

So far only a dozen police departments have applied to the FAA for permits to fly drones. But drone advocates—who generally prefer the term UAV, for “unmanned aerial vehicle—say all 18,000 law-enforcement agencies in the U.S. are potential customers. They hope UAVs will soon become essential too for agriculture (checking and spraying crops, finding lost cattle), journalism (scoping out public events or celebrity backyards), weather forecasting, traffic control.

The biggest obstacle, advocates say, is current FAA rules, which tightly restrict drone flights by private companies and government agencies (though not by individual hobbyists). Even with an FAA permit, operators can’t fly UAVs above 400 feet or near airports or other zones with heavy air traffic, and they must maintain visual contact with the drones. All that May change, though, under the new law, which requires the FAA to allow the “safe integration” of UAVs into U.S. airspace.

If the FAA relaxes its rules, says aerospace consultant Mark Brown, the civilian market for drones could soon dwarf military sales, which is currently in the billions.

Drone fever is especially palpable in Dayton, Ohio, cradle of American aviation, home of the Wright brothers and of Wright-Patterson Air Force Base. Even before the recent recession, Dayton was struggling. Over the past decade, several large companies, including General Motors, have shut down operations here. But the city is dotted with drone entrepreneurs. “This is* one of the few new industries with a chance to grow rapidly,” Brown says.

A few miles away at Wright-Patterson stands the Air Force Institute of Technology, a center of military drone research. In one lab, John Raquet is designing new navigation systems for drones. GPS is vulnerable, he explains. Its signals can be blocked by buildings or deliberately jammed. In December 2011, when a CIA drone crashed in Iran, authorities there claimed they had hacked its GPS. Raquet’s team is working on a system that would allow a drone to also navigate visually, like a human pilot, using a camera paired with pattern-recognition software.

Down the hall from Raquet’s lab, Richard Cobb is trying to make drones that “hide in plain sight.” DARPA, the Defense Advanced Research Projects Agency, has challenged researchers to build drones that mimic the size and behavior of bugs and birds. Cobb’s answer is a robotic hawk moth, with wings made of carbon fiber and Mylar. Piezoelectric motors flap the wings 30 times a second, so rapidly they vanish in a blur. Fashioning bug-size drones that can stay aloft for more than a few minutes, though, will require enormous advances in battery technology. Cobb expects it to take more than a decade.

WHAT, ONE MIGHT ask, will prevent terrorists and criminals from getting their hands on some kind of lethal drone? Although American officials rarely discuss the threat in public, they take it seriously. The militant Islamic group Hezbollah, based in Lebanon, says it has obtained drones from Iran. Last November a federal court sentenced a Massachusetts man to 17 years in prison for plotting to attack Washington, D.C., with drones loaded with C-4 explosives.

Exercises carried out by security agencies suggest that defending against small drones would be difficult. In one exercise, a mini-drone 2 feet long tested defenses at a military range. A video from its camera shows a puff of smoke in the distance, from which emerges a tiny dot that rapidly grows larger before whizzing harmlessly past: That was a surface-to-air missile missing its mark. In a second video, an F-16 fighter plane races past the drone without spotting it.

Even when controlled by skilled, well-intentioned operators, drones can pose a hazard—that’s what the FAA is concerned about. The safety record of military drones is not reassuring. Since 2001, according to the Air Force, its three main UAVs—the Predator, Global Hawk, and Reaper—have been involved in at least 120 “mishaps,” 76 of which destroyed the drone. That doesn’t include drones operated by the other branches of the military or the CIA, or drone attacks that accidentally killed civilians or U.S. or allied troops. 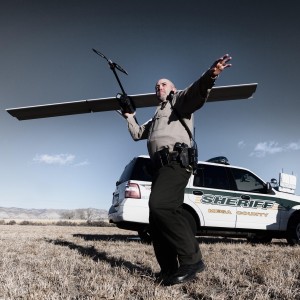 Even some proponents insist that drones must become much more reliable before they’re ready for widespread deployment in U.S. airspace. “No one should begrudge the FAA its mission of assuring safety, even if it adds significant costs to UAVs,” says Richard Scudder, who runs a lab that tests prototypes. One serious accident, Scudder points out, such as a drone striking a child playing in her backyard, could set the industry back years.

A drone crashing into a backyard would be messy; a drone crashing into a commercial airliner could be much worse. One Dayton firm is working on a “sense and avoid” system that would be cheaper and more compact than radar. The principle is simple: A camera detects an object that’s rapidly growing larger and sends a signal to the autopilot, which swerves the UAV out of harm’s way.

THE PROSPECT of American skies swarming with drones raises more than just safety concerns. It alarms privacy advocates as well. Infrared and radio-band sensors used by the military can peer through clouds and foliage and can even—more than one source tells me—detect people inside buildings. Commercially available sensors too are extraordinarily sensitive. In Colorado, Chris Miser detaches the infrared camera from the Falcon, points it at me, and asks me to place my hand on my chest for just a moment. Several seconds later the live image from the camera still registers the heat of my handprint on my T-shirt.

During the last few years of the U.S. occupation of Iraq, UAVs monitored Baghdad 24/7. After a roadside bombing, U.S. officials could run videos in reverse to track bombers back to their hideouts. This practice is called persistent surveillance. The American Civil Liberties Union (ACLU) worries that law-enforcement agencies may be tempted to carry out persistent surveillance of U.S. citizens. The Fourth Amendment to the Constitution protects Americans from “unreasonable searches and seizures,” but it’s not clear how courts will apply that to drones.

What Jay Stanley of the ACLU calls his “nightmare scenario” begins with drones supporting “mostly unobjectionable” police raids and chases. Soon, however, networks of linked drones and computers “gain the ability to automatically track multiple vehicles and bodies as they move around a city.” The nightmare climaxes with authorities combining drone video and cellphone tracking to build up databases of people’s routine comings and goings—databases they can then mine for suspicious behavior. Stanley’s nightmare doesn’t even include the possibility that police drones might be armed.

Benjamin Miller, who manages the Mesa County sheriff’s office’s UAV program, says he has no interest in armed drones. “I want to save lives, not take lives,” he says. Miser expresses the same sentiment. When he was in the Air Force, he helped maintain and design lethal drones. For the Falcon, Miser envisions lifesaving missions. He pictures it finding, say, a child who has wandered away from a campground. Successes like that, he says, would prove the Falcon’s value. They would help him “feel a lot better about what I’m doing.”

In the course of the 2010-11 school year, 48 percent of students in grades seven through 12 experienced some form of sexual harassment in person or through texting and social media, according to a new survey. It’s now routine, students say, to be called “whore” or “gay” in rumors that spread like wildfire, to be sent unwanted sexual photos, or to be groped at school.