Elephant Poaching – Slaughtered For Their Tusks

Elephant Poaching – Slaughtered For Their Tusks

Warning: This article contains graphic images of elephants being slaughtered.

States where the illegal ivory trade operates agreed to tougher measures to try to stop the slaughter of African elephants for their tusks. The African Elephant Summit in Botswana brought together negotiators from elephant habitat countries Gabon, Kenya, Niger, and Zambia; ivory transit states Vietnam, the Philippines, and Malaysia; and ivory destination states China and Thailand. They agreed to list elephant poaching as a “serious crime” under a U.N. convention, allowing them to seize assets and extradite suspects. At current elephant poaching rates, one in five African elephants will be dead within a decade. “If we do not stem the tide,” said Botswanan President Ian Khama, “future generations will condemn our unwillingness to act. ”

Despite a ban on the international trade in ivory, African elephants are still being poached in large numbers. Tens of thousands of elephants are being killed every year for their ivory tusks. The ivory is often carved into ornaments and jewellery – China is the biggest consumer market for such products.World Wildlife Fund 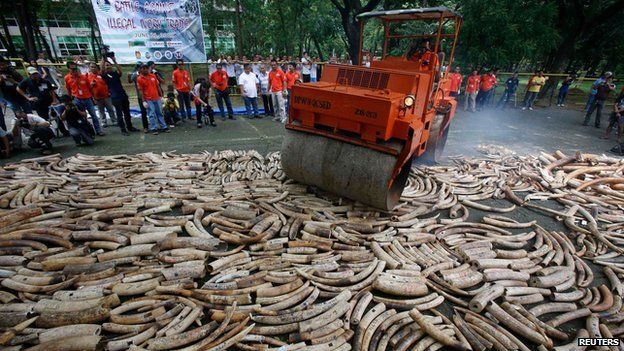 Many ivory stockpiles have been destroyed by authorities in an attempt to halt the trade.

Despite an international ban on the trade of ivory from elephant tusks, China’s demand for “white gold” is driving the poaching of over 30,000 elephants a year in Africa. What’s worse, many Chinese consumers still do not to understand that elephants are killed in order for ivory to be obtained.

Video: Ivory Poaching – A look inside the secret and dirty world of the ivory trade.

The War On Elephant Poachers

The War On Elephant Poachers

43% of Americans say the government is “definitely” or “probably” concealing the existence of extraterrestrial life on Earth.