Environmental Campaign Urges People To Be Thankful For Pollinators This Thanksgiving

Imagine what your Thanksgiving table would look like without any food that is pollinated by bees.

It’s a challenge issued by the group Environment Washington, which is highlighting the issue with a campaign called “No Bees, No Food.”

Canvassers for the group say if bees die off, then turkey, rolls and potatoes are all  that would be left on the table. Dairy products would be endangered. And you can forget about vegetables or traditional pies. 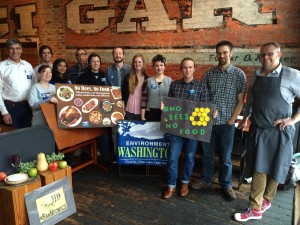 They’re concerned about the severe loss of bee populations in recent years and say pesticides called neonicotinoids are at least partly responsible. They want the federal government to do what Northwest cities including Seattle, Spokane and Portland have done: institute bans to prevent these pesticides from being used on public property .

“We’re trying to take that success here and use Seattle as an example for how we can ban these pesticides at the federal level,” said campaign director Grant Guiterrez, who is asking people to sign petitions and write letters about the issue, or support his group’s work financially.

“The goal for our campaign is to get the EPA to review the science and ban these ‘neonics’ as quickly as possible.”

He recommends a moratorium, similar to what the European Union has done.

The “No Bees, No Food” campaign has the backing of Seattle star chef Ethan Stowell, who helped launch it at one of his restaurants. It’s a coordinated effort with food service owners in cities all over the country including Boston, Minneapolis and Denver.

Some farmers say they need the insecticides to protect their crops from dangerous pests. They say addressing clear root causes such as habitat loss for bees is more important.

Environment Washington says taking a break from the use of certain widely-used pesticides encourages the development of alternative methods for pest management.

42% of Americans say that they admire Bill Clinton more than any other president in the last 25 years. 18% most admire Barack Obama, while 17% named George W. Bush, and 16% named George H.W. Bush.