My father emigrated from Ireland to the United States in the early 1920s. He had been released from Spike Island by the English who “occupied” Ireland at that time. Spike Island was the “Guantanamo” of that era, located just off the coast of Ireland. It was there the English warehoused prisoners of the Irish Republican Army (IRA).

My father had been imprisoned by the English at age 16 for running guns through the marshes of County Kerry to aid the rebels fighting to free Ireland from the rule of the English. Young Irish lads were recruited for duties like this because they would be less apt to be captured by the English–or so the IRA thought. My father was not coerced into doing this. He volunteered for the duty and would have done it again if the English had not insisted that he and other prisoners leave Ireland as a condition of their  release.

On arrival in America, he found work as a grave digger in Brooklyn, NY. Later he boxed professionally and sang in night clubs that catered to Irish immigrants. After he got married, he moved with my mother to Chicago where he was hired by the Commonwealth Edison Company. There he spent almost four decades as a lineman, often working as a “troubleshooter” who was called out in the middle of the night whenever a storm knocked out the power. He liked this work and was very good at it or so I was told by his peers when I visited him in the hospital. They had gathered in the hall outside his room after he had survived an electrical accident that occurred high on a pole in an alley. He survived 12,000 volts, an incident that got his name in the Chicago Tribune.

In January 2012, decades after my father had died, my wife discovered a photo of him on the Internet. It showed him as a prisoner on Spike Island, circa 1920. He was a farm boy, poor as the chickens he fed as a child, but the English dressed him up nicely for the photo that accompanies this story. Perhaps they didn’t want his age to show and to a degree they succeeded in that. You would think they had treated him well but they broke both his legs with rifle butts and let him sit on an earthen cell floor for a long period of time.

In the photo, my father is in the first row, third from the left. He is identified as “J. O’Mahony,” which was the family name until he became a citizen of the United States. On that occasion, the judge suggested he change his name to “Mahoney,” which was “more common” in the United States. My father agreed to the change but it was a decision he would rue for the remainder of his life. More than once he told me, “I should never have done it but I was a greenhorn, what did I know?” 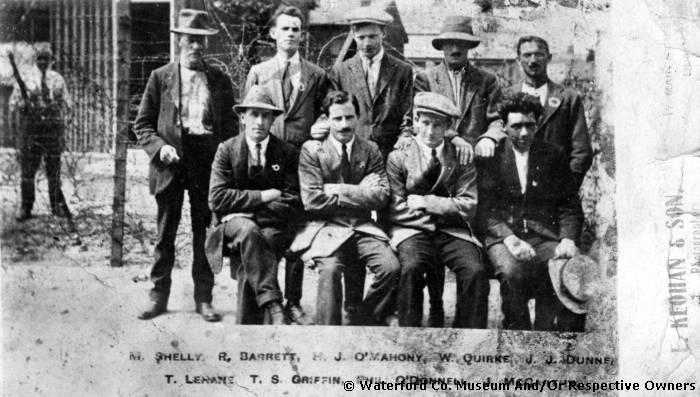 My poem, “Meeting Dad Again,” below, was written many years later after my father and I reunited in Chicago briefly after he had been out of my life for awhile. His two years on Spike Island as an adolescent had taken a toll. He suffered from post-traumatic stress syndrome (PTSD) before that ailment had been identified and named. Despite this problem, however, he was a sober Irishman who labored hard in Chicago for decades to save money to put me through college. His goal was to make certain I would never have to “work with my hands.” He didn’t have to worry. I can operate a hammer but have no manual skills beyond that.

My poem records our reunion when my father, back in town unexpectedly, phoned me at work and, to my surprise, asked that I meet him for lunch. He suggested a cafeteria that was then a Chicago landmark. No fancy restaurants for him, even though in retirement he could afford a touch of the posh. I can’t remember for certain but I doubt that he let me pay the check. He knew that I had bills as the father of five stair-step children.

The lunch went well. Conversation was light. I did not ask him where he had been or what he had been doing and he asked only pleasant questions about me and my children. He showed no mood swings to indicate that he had once been a guest of the English, a confinement that affected him far more, I believe, than absorbing 12,000 volts. The voltage crippled his hand and gnarled his arm but the English crippled and gnarled his nervous system. On this day, however, he was in fine fettle, as he liked to say. This time he was more interested in seeing me than my report card.

and we met for Ham and Yams at Toffenetti’s.

Pouring his tea, he told me he had

to restore power once

at a newspaper warehouse

and the storm broke again

and the lightning cracked his ladder.

He spent the whole day, he said,

sitting in that dark warehouse,

waiting for the lightning to stop

and for the truck to bring a new ladder.

He had a great time, he said,

sitting next to a flickering lantern

and reading for hours the Sunday comics

Donal Mahoney lives in St. Louis, Missouri. He has had fiction and poetry published in various publications in the U.S. and elsewhere. Among them are The Galway Review (Ireland), The Recusant (England), The Missing Slate (Pakistan), Guwahatian Magazine (india), Bluepepper (Australia), The Osprey Journal (Wales), Public Republic (Bulgaria), and The Istanbul Literary Review (Turkey). Some of his earliest work can be found at http://booksonblog12.blogspot.com and some of his newer work at https://www.antarcticajournal.com/donal-mahoney-recent-works

“Misquotations are the only quotations that are never misquoted.”