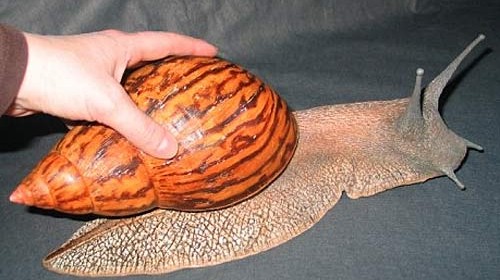 South Florida is battling a growing infestation of one of the world’s most destructive invasive species: the giant African land snail. At least 1,000 of the snails are being caught each week \ in Miami-Dade County, and a total of 117,000 of the mollusks have been caught since September 2011. They can grow as big as a rat and feed voraciously on more than 500 plant species, but one of their favorite things to eat is stucco, because it contains calcium, which they need for their shells. In the Caribbean, which in places is overrun with the creatures, the snails’ shells can blow out car tires or be hurled in the air by lawnmower blades, and their excrement and slime coat walls and pavements. “It becomes a slick mess,” said Denise Feiber, a spokeswoman for the Florida Department of Agriculture and

“We live by encouragement and die without it — slowly, sadly, and angrily.”