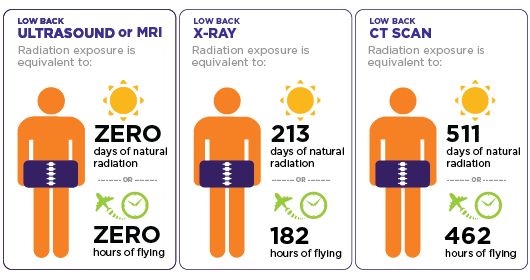 Patients are getting larger and perhaps even dangerous doses of radiation from the growing number of advanced medical-imaging tests being ordered by doctors, a new study says. Researchers at the University of California, San Francisco, analyzed data from millions of patients who received medical treatment between 1996 and 2010. They found that the number of patients who underwent CT scans tripled in that period, to more than 1 in 10, and the number of those who received dangerous doses of radiation from the scans doubled.

A recent study found that children who had multiple CT scans—often to diagnose minor fractures or infections—were three times as likely to develop brain tumors or leukemia later in life as children exposed to less radiation. While CT scans can be a valuable tool for assessing internal injuries, study author Rebecca Smith-Bindman tells The New York Times, “we need to minimize unnecessary exposures wherever possible.” Many physicians use the tests to rule out undiagnosed problems and to safeguard against malpractice lawsuits.

Since 1952, only one Democratic presidential candidate—Lyndon Johnson —has won a majority of the white vote. Hubert Humphrey, George McGovern, Jimmy Carter, and Walter Mondale all received lower percentages of the white vote than Barack Obama’s 39 percent in 2012.