Leonid Ivanovich Rogozov was a Soviet general practitioner who took part in the sixth Soviet Antarctic Expedition in 1960–1961. He was the only doctor stationed at the Novolazarevskaya Station and, while there, developed appendicitis, which meant he had to perform an appendectomy on himself, a famous case of self-surgery.

Leonid Rogozov was born in Dauriya Station, Chita Oblast, a remote village in Eastern Siberia, just 17 km from the Soviet border with Mongolia and China, near Manzhouli. His father was killed in World War II in 1943. In 1953 he completed his studies at a secondary school in Minusinsk, Krasnoyarsk Krai and was admitted to the Leningrad Pediatric Medical Institute (now Saint Petersburg). After graduating in 1959 as a general practitioner, he started clinical training to specialise in surgery. In September 1960, at the age of 26, he interrupted his training and joined the sixth Soviet Antarctic Expedition as a doctor.

From September 1960 until October 1962, Rogozov worked in Antarctica, including his role as the sole doctor in a team of thirteen researchers at the Novolazarevskaya Station, which was established in January 1961.

On the morning of 29 April 1961, Rogozov experienced general weakness, nausea, and moderate fever, and later pain in the lower right portion of the abdomen. All possible conservative treatment measures did not help. By 30 April signs of localised peritonitis became apparent, and his condition worsened considerably by the evening. Mirny, the nearest Soviet research station, was more than 1,600 km (1,000 mi) from Novolazarevskaya. Antarctic research stations of other countries did not have an aircraft. Severe blizzard conditions prevented aircraft landing in any case. Rogozov had no option but to perform the operation on himself. 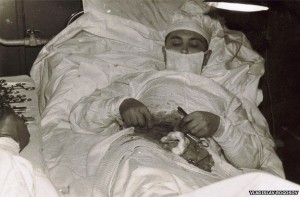 The operation started at 02:00 local time on 1 May with the help of a driver and meteorologist, who were providing instruments and holding a mirror to observe areas not directly visible, while Rogozov was in a semi-reclining position, half-turned to his left side. A solution of 0.5% novocaine was used for local anaesthesia of the abdominal wall. Rogozov made a 10–12 cm incision of the abdominal wall, and while opening the peritoneum he accidentally injured the cecum and had to suture it. Then he proceeded to expose the appendix. According to his report the appendix was found to have a dark stain at its base, and Rogozov estimated it would have burst within a day. The appendix was resected and antibiotics were applied directly into the peritoneal cavity. General weakness and nausea developed about 30–40 minutes after the start of the operation, so that short pauses for rest were repeatedly needed after that. By about 04:00 the operation was complete.

After the operation gradual improvement occurred in the signs of peritonitis and in the general condition of Rogozov. Body temperature returned to normal after five days, and the stitches were removed seven days after the operation. He resumed his regular duties in about two weeks.[1] The self-surgery captured the imagination of the Soviet public at the time. In 1961 he was awarded Order of the Red Banner of Labour.

In October 1962 Rogozov returned to Leningrad and started working on an MD at his alma mater. In September 1966 he defended an MD thesis titled Resection of the esophagus for treating esophageal cancer. He later worked as a doctor in various hospitals in Saint Petersburg. From 1986 to 2000 he served as the head of the surgery department of Saint Petersburg Research Institute for Tubercular Pulmonology.

“Every man alone is sincere. At the entrance of a second person, hypocrisy begins.”