What’s It Like to Work and Play in Antarctica’s Mac Town? 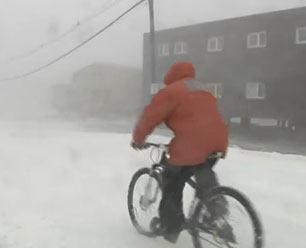 Nature films and science documentaries usually portray Antarctica to be nothing but the most cold, isolated, almost anti-social continent on earth — at least if you’re not a penguin — but life at McMurdo Station disproves that. The 2011-2012 Antarctic southern summer season is now alive and kicking (after numerous delays), and “Mac Town” (as the residents of McMurdo call it) is now home to over a thousand scientists, researchers, and artists living there part-time. More than just a couple of research buildings, Mac Town is a sprawling campus of over 100 buildings, which people can opt to get around via bicycle apparently.

In a video by diver Henry Kaiser filmed down in Mac Town, you can get a glimpse of what it’s like to live, work, and play there. There’s something a bit authentic about it since it’s shot with a handheld and not by a big professional film crew; Kaiser shows part of his regular daily life there, from breakfast in the big cafeteria (whoa, did you see that breakfast buffet?), to hanging out with his team in the research lab, to drilling holes in the ice to go scuba diving. And when he’s underwater with his diving buddies, they encounter big jellyfish, seals — and even try to play the guitar.

Good week for:
Transparency, after the U.S. government officially admitted the existence of Area 51 in Nevada, releasing documents that describe it as a secret test site for Cold War technology, including the U-2 spy plane. There was no mention of UFOs or dead alien bodies.