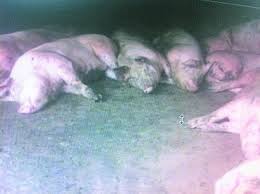 Dead dogs, pigs: Another sudden mass animal die-off has left many Chinese worried about their own health. Scores of pigs and dogs dropped dead overnight in Dongtun village, apparently from poisonous gas emitted from a chemical plant.

“All the dogs in the village had basically died off,” one resident said. “Those that hadn’t died were in their last gasps.” In the past few months, more than 1,000 dead ducks and 16,000 dead pigs have been found in Chinese waterways, polluting the drinking water of Shanghai and other cities. Officials have ruled out the new strain of avian flu, H7N9, as a cause of death, leaving pollution as the probable culprit.

“One should never indulge in useless lamentations over an inescapable state of affairs.”