I was told I have her eyes, her thick brows–

didn’t think much of it:

We all have something of someone.

My sister has Aunt Natalia’s smile.

(back in the day when my uncle had hair).

We call her “Nevera con Patas,”* (fridge with legs)– not to her face of course, but when she leaves the room to go to the bathroom or during dinner when she’s not paying attention.

I didn’t notice her boxy shape until my father pointed it out, and only started calling her that because everyone else did. Besides, it’s a catchy name.

“Rosita, did you see the new magnet I got on the fridge? Get up, and look at it.” Father always has a funny remark until it’s about you.

“You took out your brows! ¡Qué idiota! You have spaghettis! Two skinny spaghettis on your face!”

Now I’m trying to get them back.

Years of trimming and waxing have caused

hairs to sprout above and below, but never in the right spot.

My wings of a Reina Mora

have lost most of their plumage, and

I don’t understand how she did it, but she knew everything.

I’d hide from her many times

so she wouldn’t scrutinize my face and ask me about the party I went to,

the class I was skipping, or the boy I was seeing.

The night she was taken to the hospital, she said a prayer–

the people in it,

because we needed guidance in learning to withstand,

to fight against ourselves–

our fears, insecurities, and hubris–

while remaining at peace at the same time.

I didn’t see her death coming, but she knew,

even when we tried to convince her otherwise:

“Don’t worry, Abuela Flor. You’ll be out of here soon, and we’ll have a big feast with pernil,  arroz con habichuelas, ensalada de papa, pasteles, and coquito. And we won’t put alcohol on yours. We’re going to eat so much! You’ll see.”

We buried her on our island, honoring her last wish.

She secures it for posterity,

so it doesn’t run out of water

because it can’t run out of water–

and feathers can often grow. 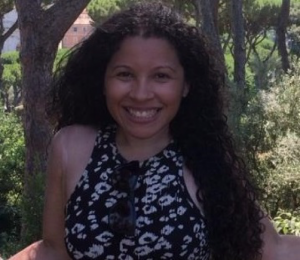 Being a Latina is fire and wind,
a hummingbird in the skies
flying backwards and upside down.
It’s a hot lava stone pressed upon one’s back,
containing words carved by tongue.
A teaching, a story, a song–
improvised and from memory,
taken from ruins to create new horizons.
(Excerpt from Elaine Nadal’s poem “Pride”)

“If markets were rational, I’d be waiting tables for a living”