Poem – BANG FOR THE BUCK (By Ray Gallucci)

BANG FOR THE BUCK

There’ve been five big ones that we know

That dealt a cataclysmic blow

To life existing on the earth

And one to which the moon gave birth.

The first when life was water-bound.

One hundred million more went by

Till death to species wet and dry.

The third and greatest of them all –

That dwarfed the last when dinosaurs

And other large ones ceased their roars.

Next hundred million had elapsed

When earth received a cosmic blast

Where lay the monster crater’s print?

It seems Antarctica was once

As other continents as lush,

When struck by messenger of doom

And don’t forget the one between

That warmed the earth again to death.

That had Antarctic land disturbed.

Then hundred million plus until

But back when earth was very young,

It had its bell completely rung

By Mars-sized Theia that became

A part of earth we know today.

It likely gave the earth its spin

And tilted it to where it’s been.

Would earth have life without the moon,

For it enabled cosmic tune

To play in harmony that led

To life instead of planet dead?

But, as we see, there’s give and take.

You cannot have and eat your cake.

For what from cataclysm rose

May end in matching deathly throes. 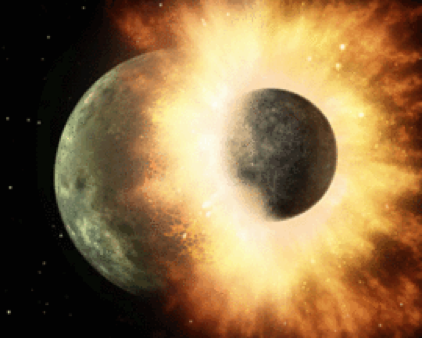 The giant impact hypothesis states that the Moon was formed out of the debris left over from a collision between the Earth and a body the size of Mars, approximately 4.5 billion years ago. The colliding body is sometimes called Theia, for the mythical Greek Titan who was the mother of Selene, the goddess of the Moon. (http://en.wikipedia.org/Giant_impact_hypothesis)

I am a Professional Engineer who has been writing poetry since 1990. I am an incorrigible rhymer, tending toward the skeptical/cynical regarding daily life. I have been fortunate to have been published in poetry magazines and on-line journals such as NUTHOUSE, MOTHER EARTH INTERNATIONAL, FEELINGS/POETS’ PAPER, MÖBIUS (when Jean Hull Herman published), PABLO LENNIS, MUSE OF FIRE, SO YOUNG!, THE AARDVARK ADVENTURER, POETIC LICENSE, THUMBPRINTS, UNLIKELY STORIES, BIBLIOPHILOS, FULLOSIA PRESS, NOMAD’S CHOIR, HIDDEN OAK, PABLO LENNIS, POETSESPRESSO, SOUL FOUNTAIN, WRITER’S JOURNAL, ATLANTIC PACIFIC PRESS, DERONDA REVIEW, LYRIC, THE STORYTELLER, WRITE ON! and DANA LITERARY SOCIETY.

The 10 biggest tax breaks will save American taxpayers more than $900 billion this year, with 51 percent of the benefits going to the richest 20 percent of households, according to a new report by the Congressional Budget Office. The wealthiest 1 percent—those with at least $327,000 in annual income—got 17 percent of these tax benefits.