Poem – Living Outside the Box (By Mankh) 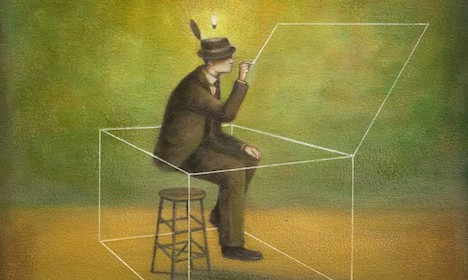 Living Outside the Box – By Mankh

The Empire likes to track people in their boxes
pay-to-play self-identification,
credit cards, membership cards,
driver’s license, registration, insurance cards,
yet the free-self learns from its self
opens its own cosmic package
tears away the layers of false identities
until some unextinguishable little truth
shines forth.

The Empire likes to box behaviors,
label them like pharmaceutical diagnoses
the best, lost seeking found, damaged, return to sender,
yet free-self permeates the atmosphere
can’t be taped shut with its mouth sealed
legs crossed back bent, for every give ─ a take,
yet just being is the primordial gift
whose unraveling shows you what’s next,
shows how to spiral thru the Empire
where the subservients box themselves,
box each other,
box the-powers-that-box.

Living is the ace in its own hole,
try to play it light.

Share this:
tagged with 2016, living outside the box, mankh, poem, poetry, soul fountain

Start the day with a smile! It irritates people.