It was that innocent and
silent night,
when all souls were hibernating
and the cockerels were roosting,
that the ambience was polluted.
A thousand unthankfullness to
the wordsmith, for waking up
his lethal injection from its long coma.
Then starring it as the major actor
in the stage of the imminent massacre.

He bled intermittent ink via vein of
his device, the weapon of mass destruction
and died each words and figures of speech
in a bloodbath.

He strangled metaphors to “adjectivate” the
nouns and incarcerated them in
caps lock to capital punishment to curtail
their reincarnation into pronouns.

The ironical sentences were sentenced to embrace
the gallows, just opposite of the strangulation scene.

Moreso, the paradoxicals were decapitated,
to buttress more of their absurdity.

Still insatiable, the wordsmith crucified the verbs to
add more action to the wordy holocaust,
before slashing the adverbs for their modifier effects.

Similarly, some similes seemed out of
resemblance, so their i’s were dotted and their
t’s were crossed as soon as possible.

At the terminus stage, he threw shots
at the Onomatopoeias to resonate
boom! bang! pow!
to serve as sound warning to the rest.

The dawn descended, hyperbolizing
yesternight’s wreckage in form of rumours.
The entire neighbourhood called on the cops
to try the wordsmith for his executions.

But when they all visited the site where
the murder was published, they held
their breaths, gazing at such magnificent
display of maleficent dexterity of art.
The skills in which it was executed was
mind blowing, unprecedented, more like the
last wonder of the world. The forensics
couldn’t find any evidence to justify
it as murder, for the felony was more beautiful than
beauty itself.
“No! this is not a murder…” uttered from the audience,
“…this is Art at its best”. 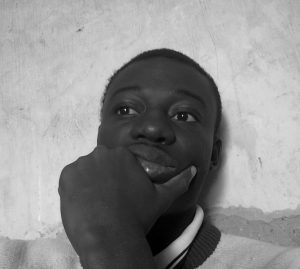 Abdulrahman M Abu-yaman (b.1991) is a poet by nature and an amateur artist (caligrapher) by second nature. A collector of autobiography, and a student of fashion. He follows sports and supports Chelsea FC. He participated at the Abuja Literary Society Poetry Slam 2016. His poems have appeared in London Grip, Kalahari Reviews, Tuck Magazine, Brittle Paper, and forthcoming in Asian Signature to be featured as a contemporary world poet. He tweets @abuu_yaman

Bad week for:
Sharing, after fugitive Anthony James Lescowitch Jr. of Pennsylvania posted a police photo and “wanted” bulletin of him on his Facebook page, with the sneering comment, “LOL, I f—ing love it.” He received two “likes” and an invitation from an undercover officer posing as an admiring female, which led to his arrest.